How to load Taulabs onto an Openpilot Revolution mini

While Sparky2 is probably the best go-to board for Taulabs, the Revo mini can actually be bought, since it's usually in stock...
So instead of waiting who knows how long for someone to have a Sparky2 in stock, I bought a Revo mini. If you compare the 2, you'll see that there's only minor (but still important) differences.
Revo mini schematic vs Sparky2 schematic
There's just the issue of Taulabs not detecting the board with the Openpilot bootloader. You can try and go the masochistic route, or you can actually do it the easy way.


If you see text while the switch is booting, you're golden. If not, something is not working the way it's supposed to.
Before you can start wreaking havoc in the console, you have to wait for the switch to boot. There is a procedure to get console before boot, but that is generally useful only if you locked yourself out.
Once you get the ASCII-art logo, press CTRL+y, then type "en" or "enable". Let the typing begin.
v 16:20 0 komentářů

In case you don't know what a Dell D220P-01 is - it's a power supply for the SFF version of Dell's Optiplex 740 series PC. The neat thing about it is that unlike a traditional ATX PSU, this one is 12V only, so you get 220W @ 12V (18A) maximum and the PSU should not complain too much.
Another neat thing about them is that the PCs are legitimately junk, so you can get them even for free.
The pinout is in the picture, "P5" has to be connected to ground in order for it to turn on. Unlike newer server PSUs, this one can be connected straight from the start.
If you're like me and don't feel like butchering the connector, you'll need a breakout board. The connector is mechanically (!not electrically!) compatible with an 8-pin EPS12V power connector (plug is Molex 39-01-2080, PCB socket is  Molex 39-28-1083, terminals are Molex 39-00-0168 and Molex 44476-1111).
The 8-pin PCIe power connector is different with the placement of the square and hexagonal holes and is not mechanically compatible...not like that will stop the 200 pound gorilla from trying to jam it in...
Needles to say that if you plug this (and turn it on) into an EPS12V connector of a working motherboard, you will turn it into a non-working one, as the voltage is inconveniently reversed and the power supply will turn on. Results may vary from nothing at all to a spectacular fire and mini explosions of the caps.
If your junkbox doesn't contain a motherboard with an 8-pin EPS connector, fret not, there is an alternative!

Yep, it's not a true hack unless it involves a hacksaw!
side note - on any newer-ish junk motherboard, I suggest cutting the connector out, as the inner power layers use thicker copper (for heatsinking) and carry away heat from the soldering, making it very difficult.

As said earlier, plugging this PSU here to the MB is also not a good idea, although it should not turn on (results may vary). If the PSU does turn on, it will be short-circuited, if it "wins" over the short (burns through), it will send 12V to a 5V line...

Here's my quick and (really) gritty breakout board.

Yes, it's fugly, yes, it could've been nicer...I was going for "fugly, but functional". The crapton of solder should make sure that it can actually carry the 18A the PSU can deliver.
I kept the +12V rail from being at the edge, as it lowers the chance of an accidental short. The brass washers are actually soldered to the board.

While Totally not a bomb Mk II was useful for testing, it was a little too bulky even for the 1:10 car, so it was time to go shopping again...

1) Liberate the TL-WN722N out of it's plastic casing
2) perform UglyHack™ No.1 by desoldering the USB connector and solder on wires instead. Solder the other end fo the data lines into the USB port of the Rpi and solder the power to the power USB port of the Pi. PP1 is +5V, PP6 is gnd, PP22 is D+ and PP23 is D-. Twist the data lines to avoid weird shit from happening.
Make liberal use of Kapton tape, covering all the exposed pads to avoid short circuits later.
3) Perform UglyHack™ No.2 by desoldering the RSMA connector and soldering on the pigtail one.
Again, Kapton tape is a must, not only as an electrical insulator, but also strain relief. 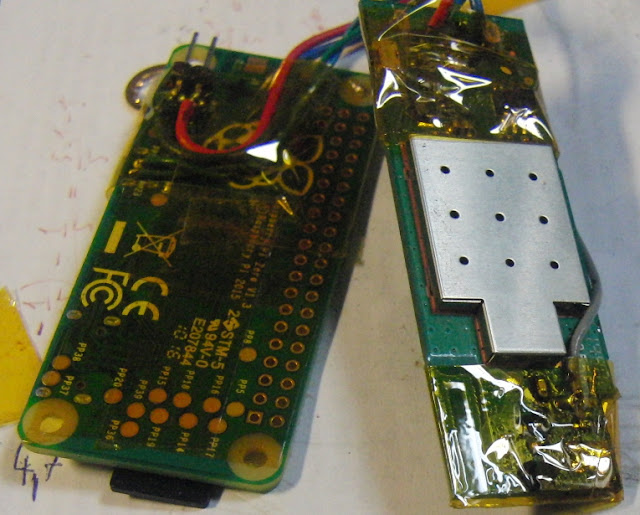 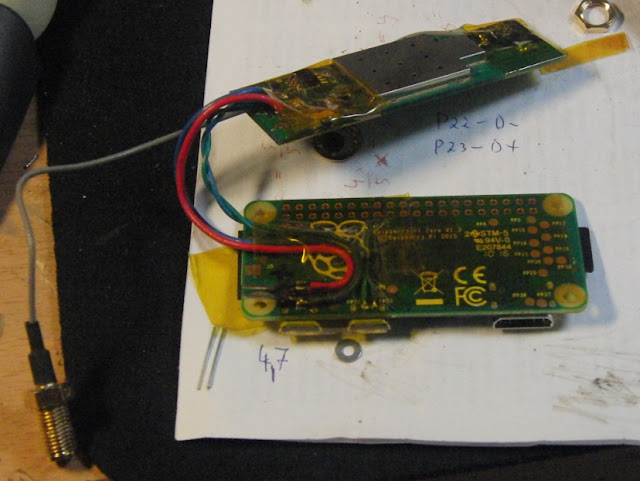 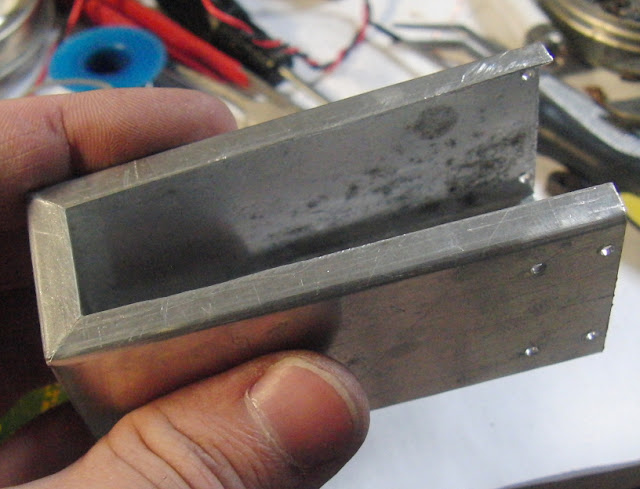 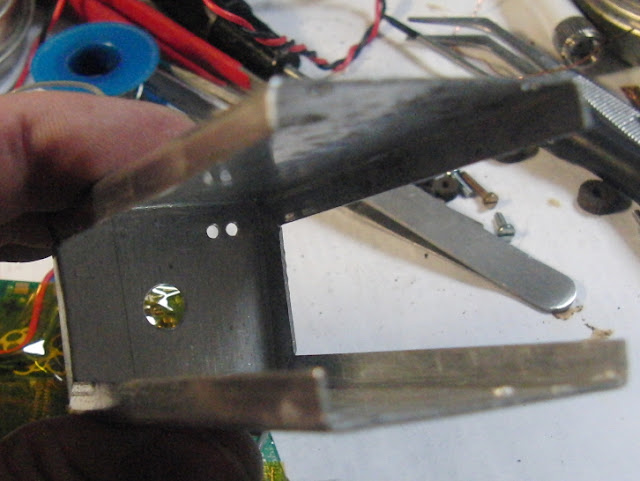 The other half is just a rectangular "U" shape, some of the holes are actually threaded.
6) Jam everything in, making sure that nothing is touching where it shouldn't.
In my implementation, the Pi is held a few mm away from the wall with screws and nuts on flexible washers. Some day I'll probably add a thermal pad between the main IC and the box, it does get warm.
The metal shield of the WiFi dongle is in direct contact with the wall to aid cooling, as it gets fairly hot when running with EZ-wifibroadcast. The DC-DC module is not even warm to the touch, so it can just float in the middle.
7) connect camera, strain-relive the cable so it doesn't get damaged.

8) attach to desired mode of transport
A few notes:

Wifibroadcast - measuring latency on a laptop

My method of measuring the absolute latency scene-to-screen involves the camera looking at the receiver screen which is partially obstructed by a smartphone running a stopwatch, all being recorded by a Casio EX-F1 at 600fps. 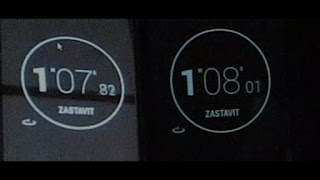 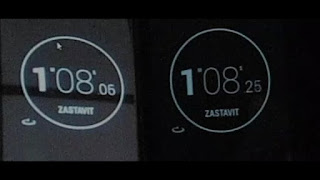 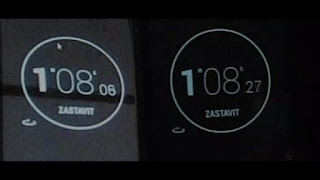 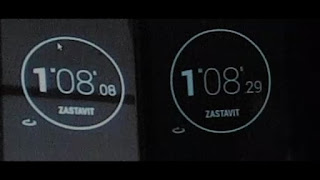 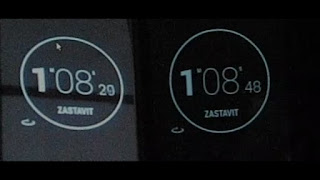 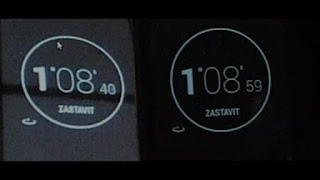 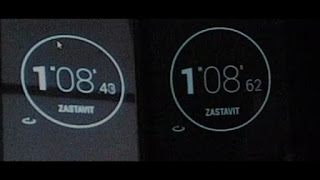 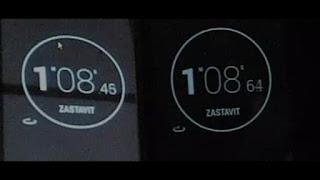 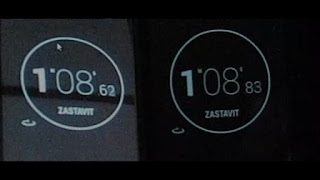 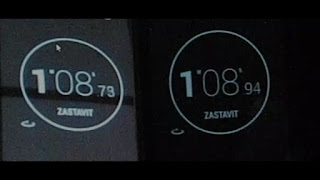 The darker one is the smartphone screen, the lighter, grainy one is the laptop. I picked shots where both numbers are not blurred as they are changing.
Phone has an LCD, not AMMOLED display, so it tends to blur fast changing stuff. Both displays (phone and laptop) should be TFT, so about as fast as a consumer-grade LCD can be.

Wifibroadcast receiving on a PC

Installing wifibroadcast:
open Terminal or some other commanline and input:


If there's no screaming or error, you may proceed with connecting the wifi card and waiting until it lights up. Then proceed with setting it up:
Run the program with:

Once there is a valid signal from the transmitter, the wifi LED will start flashing and shortly after you should see a window with the stream pop up.

To start it up again, repeat the setup (no need to install anything again) and run the program. Here I'm using wlan1, because I'm assuming that like me, you'll be using a laptop, so wlan0 will likely be taken by the internal wifi card. This may however not be the case, unless you are sure, check with ifconfig .

Scripting it because typing everything is for noobs

1) create a new file (with no extension) and open with a text editor of your choice (I used gedit)
2) paste the following into it:

3) save to a convenient place, like /home
4) type the following into terminal, replacing "script_name" with the actual one you saved:
This gives the script read and write permissions.
5) to run the script, you only have to type:
Again, replacing "script_name" with the actual one. You have to use sudo, because it needs permissions to tweak the wifi dongle. Without it, it'll never run.
v 19:40 1 komentářů

This was done on a Lenovo x230 running an aftermarket SSD, Windows 8.1 and Ubuntu 14.01 LTS, all from UEFI-capable bootable USB flash drives. Both OSs run in secure mode with no bitching.
The boot menu is slow to load (10s for me), but that seems to be feature, not a bug.
Your results may vary, as i uderstand UEFI implementation is not perfectly the same for all PCs.