Been lazy and didn't bother to take any pictures during the procedure...sorry. Wasn't that much to see anyway - wet sanding with 600, 800 and finally 1200 grit sandpaper. Then notebook polishing again. Turns out it's not communist since it was made by a shareholder company. Someday in the beginning of the 90s. Still worked though. 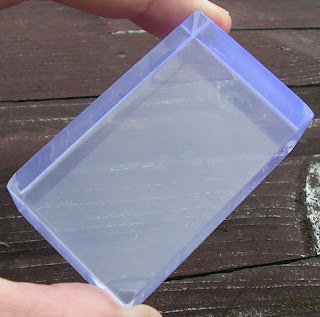 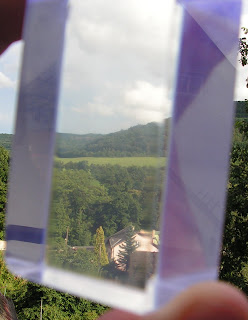 Still far from perfect, but it's nice & transparent.
Note the TIR. 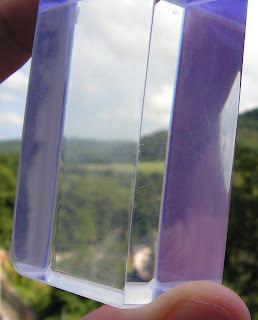 Here you can better see the surface texture.
Again, note the TIR. 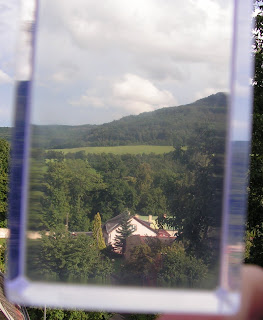 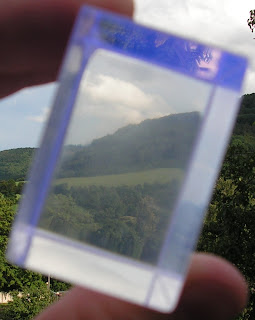 This side is not that good, I might have to do a bit of work on it later.
One of these sides is going to face the photomultiplier. 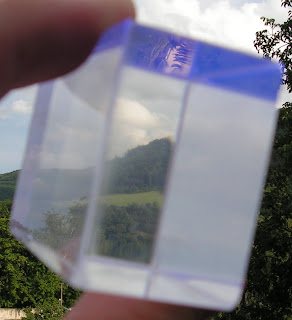 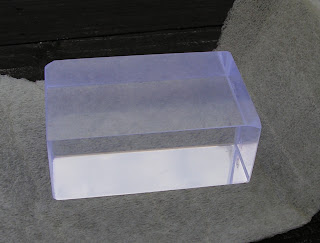 Turns out that Mirelon is good safe-packaging material. Normally it's used under floating floors.
I have quite a bit of leftover, which is why I use it for almost anything...
note: I've found out, that the paper I used for polishing quickly clogs up and instead of polishing starts to create sort-of clumps that stick onto the scintillator. You have to use just one paper per side, use a clean one for the next side. Sometimes even that is too much.
Also, the PVT significantly charges with static electricity when rubbed on the paper. Tends to attract dust and holds the charge quite well. Also, it tends to charge you.
Well, that's the scintillator. Wasn't that hard now, was it? BC-408 is quite easy to machine, you just have to be careful with the heating, it doesn't seem to mind wet and dry sanding. You certainly couldn't do that with an NaI(Tl) crystal since it's hygroscopic.
To come: I've managed to score 2 FEU-36 photomultiplier tubes for a ridiculously low price. It's an old Russian-made cesium-antimony photomultiplier with 13 dynodes. Also quite big, since it runs on between 1,24 to 1,6 kilovolts. Did I mention it was made in 1963?
Quite nice it comes with it's own datasheet which has !hand! written measurements. Also, it's completely in Russian. Yay for me...
v 18:39